Google Secrets Manager integration with Kubernetes is currently available as an OPEN BETA. Please report any issues to the #nais channel on Slack.

You may store secrets in Google Secrets Manager as an alternative to the other offered solutions.

Start at the GCP Console page and refer to the documentation for guides and how-tos on creating and managing secrets.

All secrets must exist in the region europe-north1. This option is found when you click manually select region. Unfortunately, we cannot enforce a default value here. 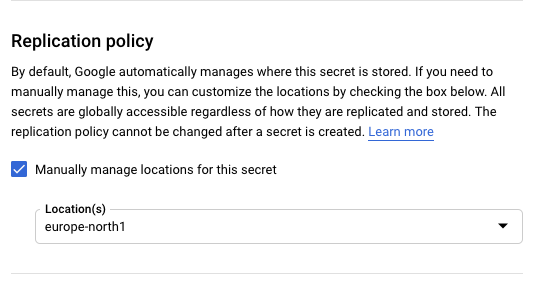 Label your secret with sync=true to enable synchronization to NAIS. The latest secret version will be copied into your Kubernetes namespace. This feature is only available in GCP clusters.

If the secret already existed without this tag, you must create a new secret version to effectuate the sync.

Modifications to secrets will NOT be synchronized back to Google Secret Manager, and any modifications might be overwritten at any time.

If your secret contains a list of environment variables:

The synchronization of secrets into namespaces is managed by the application hunter2. This application runs in all team namespaces.